What Mad Men’s Don Draper Taught Us about Social Media

Ok, ok, we know that Don Draper wasn’t real…..but the insights he had on Mad Men about how to create powerful marketing campaigns certainly were. But while his character was based in an era where social media didn’t even exist (at least not in the form it does today), we kind of get the impression that Don would have been as brilliant as a social media manager as he was a creative account executive.

Here are the top 5 ways Don Draper’s beliefs and utterances can teach us about effective social media marketing today:

A key takeaway from Don Draper’s role as Madison Avenue’s most successful ad man is that the most effective marketing forges an emotional connection between the consumer and the brand. You’re selling emotions, not products.

Nowhere is this more powerfully demonstrated than the scene where Don sells a campaign to Kodak based on a slideshow of his own family photographs. His pitch taps into the deep-rooted nostalgia we all have for our childhood and our parents. The Kodak execs look as stunned as we (the audience) feel when the Kodak reel finishes. 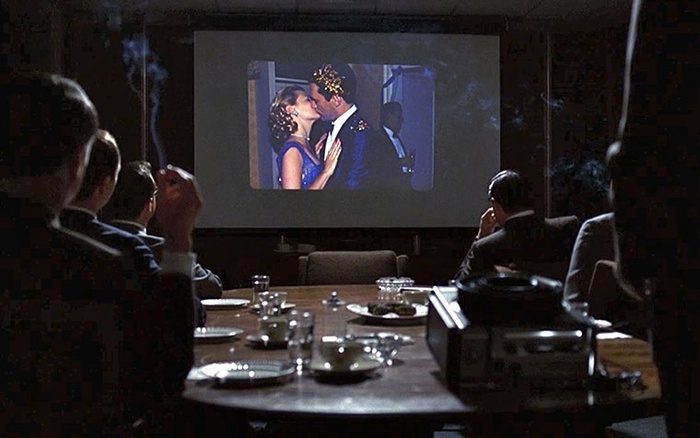 In his powerful pitch to the Kodak execs, Don talks about what his first boss taught him about nostalgia: “We also talked about a deeper bond with the product — nostalgia. It’s delicate but potent. Teddy told me that in Greek, nostalgia literally means ‘the pain from an old wound.’ It’s a twinge in your heart far more powerful than memory alone”.

The product Kodak wants to sell is a wheel mechanism that loads slides and operates in a loop. The execs are apologetic about how difficult the product is to sell, as it seems rather boring and technical to customers.

But Don corrects them. “This device isn’t a spaceship; it’s a time machine. It goes backwards, forwards. It takes us to a place where we ache to go again. It’s not called ‘the wheel’; it’s called ‘the carousel.’ It lets us travel the way a child travels, around and around, and back home again to a place where we know we are loved.” 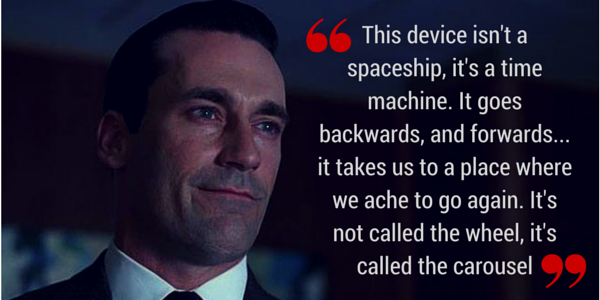 Lesson: If you can use your product or service to connect with powerful, deep-seated emotions of your market, then you are onto a winning strategy. Social media streams are the perfect platforms for emotions marketing, because they’re where people come to connect, be entertained, and share posts, images, and snippets of information that rouse them in some form or another.

More and more companies are beginning to understand the sheer power of emotions marketing. Strike upon the right chord and you can blow your competition out of the water.

The Canadian low-cost airline company West Jet, for example, organized a great event where they asked 250 fliers (kids and their parents mostly) what they wanted for Christmas and then organized for Santa Claus to actually deliver those presents to them at the end of their flight. Watch the video below, and tell us honestly that your eyes didn’t well up…..the company expected 800,000 views on YouTube: they got more than 41 million.

If you can create a social media campaign that taps into a strong human emotion, like love, nostalgia, fear, pity, or guilt, then you’ve created a powerful tool with which to hook potential customers swimming in the social media stream.

2. It’s Not the Technology that Matters, it’s the Idea

Time and time again, Don struggled with account executives at Sterling Cooper that he felt didn’t understand or value “creative” – shorthand slang in the business for the people who come up with the brilliant ideas behind the campaigns.

In response to someone who tells him that sex sells, Don retorts, “Says who? Just so you know, the people who talk that way think that monkeys can do this. They take all this monkey crap and stick it in a briefcase, completely unaware that their success depends on something more than shoeshine.”

Don is right. More than ever, it is the idea that cuts through the social media noise – not the tools that gets it there. Don wouldn’t care about the number of likes your post got on Facebook or how many people re-tweeted your tweet: those things simply wouldn’t mean anything to him. What’s important is that your message connects. That it’s powerful enough to cut through the noise. 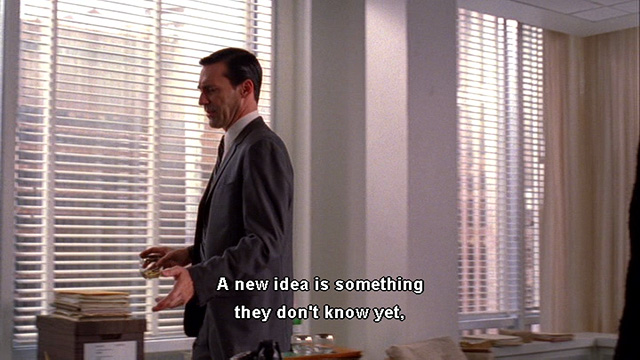 It’s the big ideas that will be remembered, not the details of your campaign, and certainly not the technical details of the product itself. Content and ideas matter – not their modes of delivery.

A good example of a modern-day company following this concept is Upworthy – famously, they tell their story curators and writers to come up with twenty-five different titles for each post, run it through their rigorous A/B testing system, and only put out the titles that are proven to “land” best with social media users. 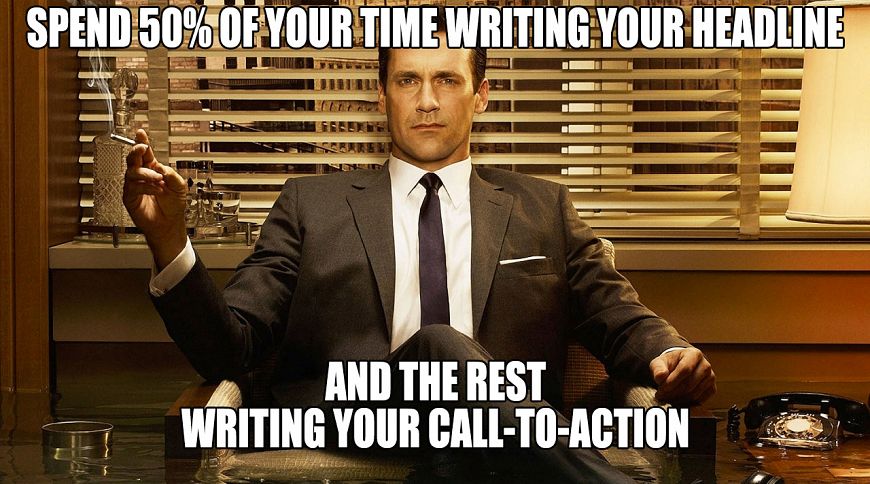 As Don says: “Give me more ideas to reject.” In other words, never stop coming up with the next Big Idea. 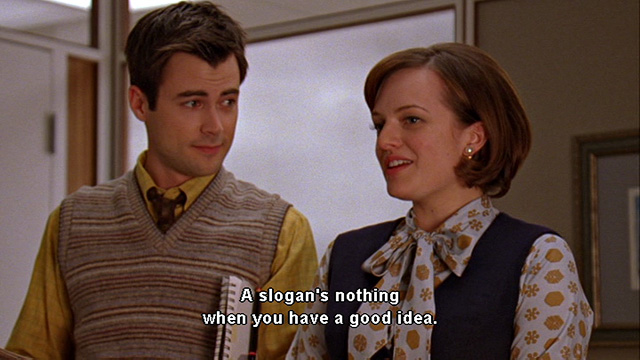 Not every social media campaign is going to be successful – and some can even go so badly wrong that you will be left wondering how you’re going to get out of it. Social media is a volatile and ever-changing environment, where a negative reaction to a product or a brand can do enormous damage, because the fallout can reverberate around the Internet through a million clicks and shares.

Don Draper knew this only too well. He suffered a major disaster when he lost the Lucky Strike campaign and was facing almost certain ruin (loss of employment, his reputation, etc.). So what did he do? He changed the conversation. 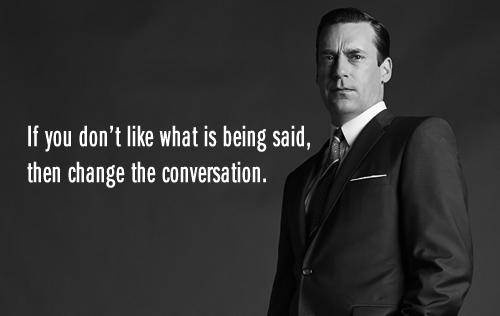 Specifically, he sent a public letter to the newspapers telling everyone that he was quitting Big Tobacco, instead of the other way around. In other words, he turned a catastrophe into a selling point, and got an enormous amount of press attention out of it. He didn’t like the conversation, so he changed it. 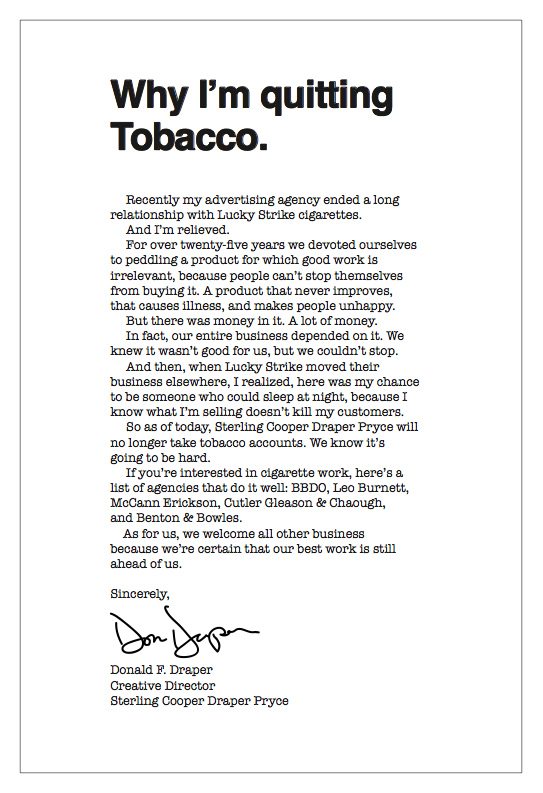 If you can’t come up with a brilliant idea like Don’s to turn a crisis into an opportunity, at least learn how to manage a crisis and limit the damage. Don’t throw fuel on the fire like Nestle social media managers did when their Facebook page was inundated with protests by consumers over their use of palm oil in their products, an ingredient that has been proven to cause severe environmental damage.

In response to the creative efforts of some consumers to deface the Nestle logo and leave concerned comments, Nestle got defensive. And ugly. And rude. Well, let’s just say that they didn’t change the conversation and leave it at that.

Here’s one of the ‘enhanced’ logos that fans sent into the Nestle Facebook page: 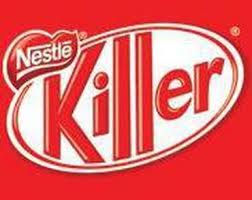 And here’s Nestle’s response, for which they later apologized (long after the damage was done, we’d say). 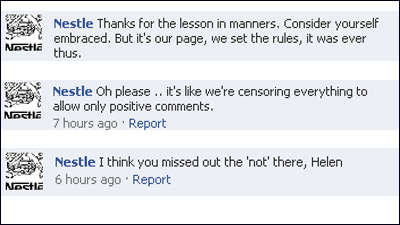 Take a leaf out of Don’s book: if things do get sticky, at least change the conversation and deflect attention away from your cock-up. At least, do all you can to limit the damage – apologize, make amends, and so on. Do NOT compound a failure by drawing more attention to it and insulting social media users. Because they will OWN you.

With the explosion of social media and digital marketing, the face of advertising has changed. No longer is there a buffer zone of media agencies between a company and its users: on social media, companies and individuals are having direct conversations with each other in ways never before imagined. For some companies, the ins and outs of social media can be terrifying. Understandable, but listen to what Don has to say on the subject: 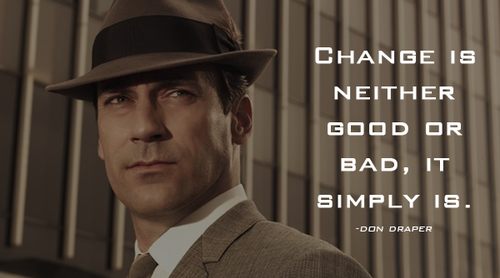 “Change is neither good or bad, it simply is.”

Embrace change and try to view it as a chance to get ahead of your competitors. You may strike upon an idea that your competitors don’t, like the West Jet example above, which blew their competition out of the water on social media (to their utter amazement).

Almost every business these days has a Facebook page, putting them at the very forefront of the social media conversation. So consider this: every post you put out is a pitch to potential customers. Make sure you get it right.

Half the battle of getting it right involves having the right person within your company as your social media manager. This has to be someone who understands how managing social media campaigns is a game of managing and stoking expectations. And how every post has to be pitch-perfect, so to speak.

Don Draper learned this lesson the hard way when he put Peggy in charge of pitching to Heinz, whose execs were looking for a way to rebrand beans as a cool product for the hip Coca Cola generation (as opposed to a war-time housewives type of product).

Not only did Peggy get it utterly wrong (pitching an idea that confused the execs and made them suspect they were being made fun of), but Don, the rainmaker of the firm, the one they all pay to see, turned up only at the very end of the conversation.

In the end, Don turned it around, but not before being reminded that he needed to put his best foot forward at all times, or risk losing an important account.

The takeaway here is: every post is a pitch to potential clients, so make sure that the person crafting the pitch message and managing its delivery is someone who knows what they are doing. Tone deaf social media managers do more damage than a bull in a china shop. Just ask Nestle.

Insurance continues to be one of the hottest spots on the web.…

Christopher Pulcher-Coard’s Vision of the Future of Technology

The Value of NoFollow Links in Web Marketing